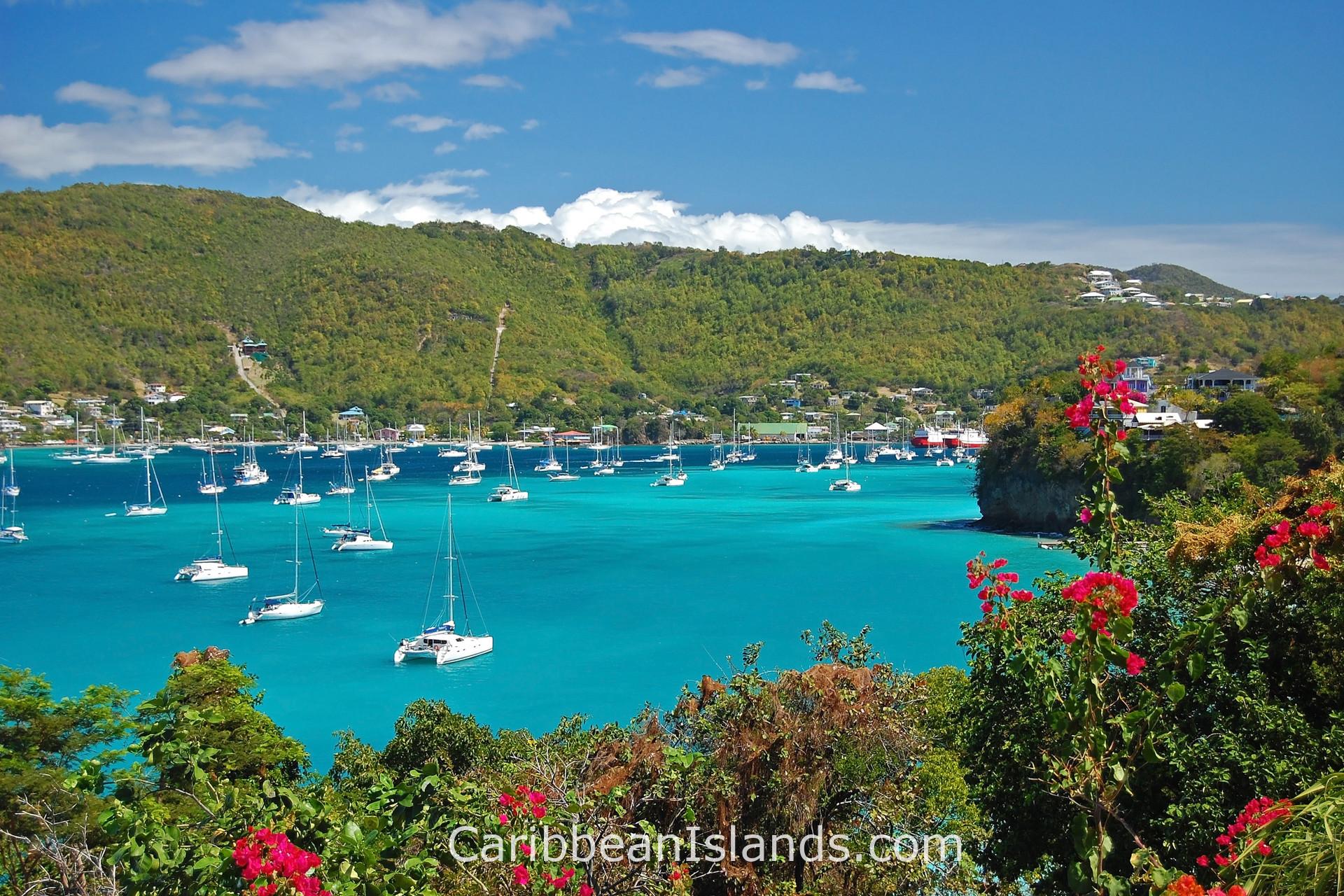 This island cluster lies within the Lesser Antilles south of St. Lucia and west of Barbados. The island cluster is 150 square miles with the main land consisting of St. Vincent while the northern two-thirds of the region is made up of the Grenadines. The island cluster lies within the Hurricane Belt with hurricanes being the most prevalent during the rainy season which lasts between June and November. The dry, warm season lasts between January and May. The island terrain is divided as well. The windward side is steep and rocky. The leeward side has numerous beaches and bays that offer a variety of water activities and beautiful scenic views.

And others islands are uninhabited:

Map of Saint Vicent and the Grenadines

Video on the ascent to the volcano La Soufriere

This video is about Shannon’s 8 hour hike along the leeward coast of the island of St. Vincent to visit La Soufriere (prounounced La Soufray), an active volcano that last erupted in 1979. It is the highest peak in the island country of St. Vincent and the Grenadines at 4, 049 feet. Along the hike beginning at Richmond Vale Diving and Hiking Center, the guide Samuel, told of the abundant plant life that grows along the trail, including several different kinds of mango that were ripe to enjoy as a refreshing snack along the way!

Wrapped around the bay on the southwestern coast of St. Vincent, Kingstown is a small capital with big appeal. The busy harbor makes the city vibrant, pristine Georgian buildings line the narrow streets, and the waterfront offers endless possibilities for shopping, dining and water sports.

St. George’s Anglican Cathedral is one of the highlights of Kingstown. This house of worship stands immaculate and refined on Grenville Street. Built in 1820, the creamy-yellow church is an outstanding example of Georgian architecture, and it welcomes visitors with an ornate chandelier, simple wooden pews and exquisite stained-glass windows. Queen Victoria actually ordered one of the windows for St. Paul’s Cathedral, but she was appalled when the artist swathed an angel in a red robe. The window was sent to St. George’s, where it remains one of its most beloved features.

St. Mary’s Roman Catholic Cathedral and School is another remarkable church in Kingstown. The gorgeous cathedral was first built in 1823 but underwent many repairs and changes until the final two wings were added in 1930. Beloved for its Romanesque style, the church boasts remarkable courtyards, fountains and archways.

Another must-see sight in Kingstown is Fort Charlotte. Perched on Berkshire Hill just west of the city is this historic fort that offers spectacular views over the capital and the bay. Built in 1806, the fort housed over 30 canons and more than 600 troops to defend against Caribs.

On sunny days in St. Vincent and the Grenadines, one of the best places to explore is the St. Vincent Botanic Gardens. Established by General Robert Melville in 1765, the gardens grow on the outskirts of the capital. Lush, serene and colorful, the gardens are abundant with tropical trees, plants, birds and flowers. A breadfruit tree that descended from one planted by the famous Captain Bligh on his second expedition to the Caribbean in 1798 still grows in the gardens, and the aviaries provide a home for the national bird, the St. Vincent Parrot.

Kingstown’s seafront is dominated by Bay Street, which bustles with local shopkeepers and businessmen by day and restaurant-goers by night. The stone and brick buildings that line the street are marked by stone arches characteristic of the Georgian style and second-floor overhangs, giving visitors respite from the hot sun and the capital its nickname as the “City of Arches.”

At the street’s south end is Grenadines Wharf, where ferries transport people to the Grenadines and schooners load their supplies. Just a short walk from the wharf is the Cruise-Ship Complex, home to a mall and many restaurants.

Villa Beach, the island’s most popular stretch of sand, is about a 10-minute drive from the capital. Swimming is safe in the tranquil waters, and many charming cafes and affordable watersports stands line the coast.

Close by Villa Beach is Indian Bay Beach, where golden sands lead to reef-protected waters that are perfect for both snorkeling and swimming.