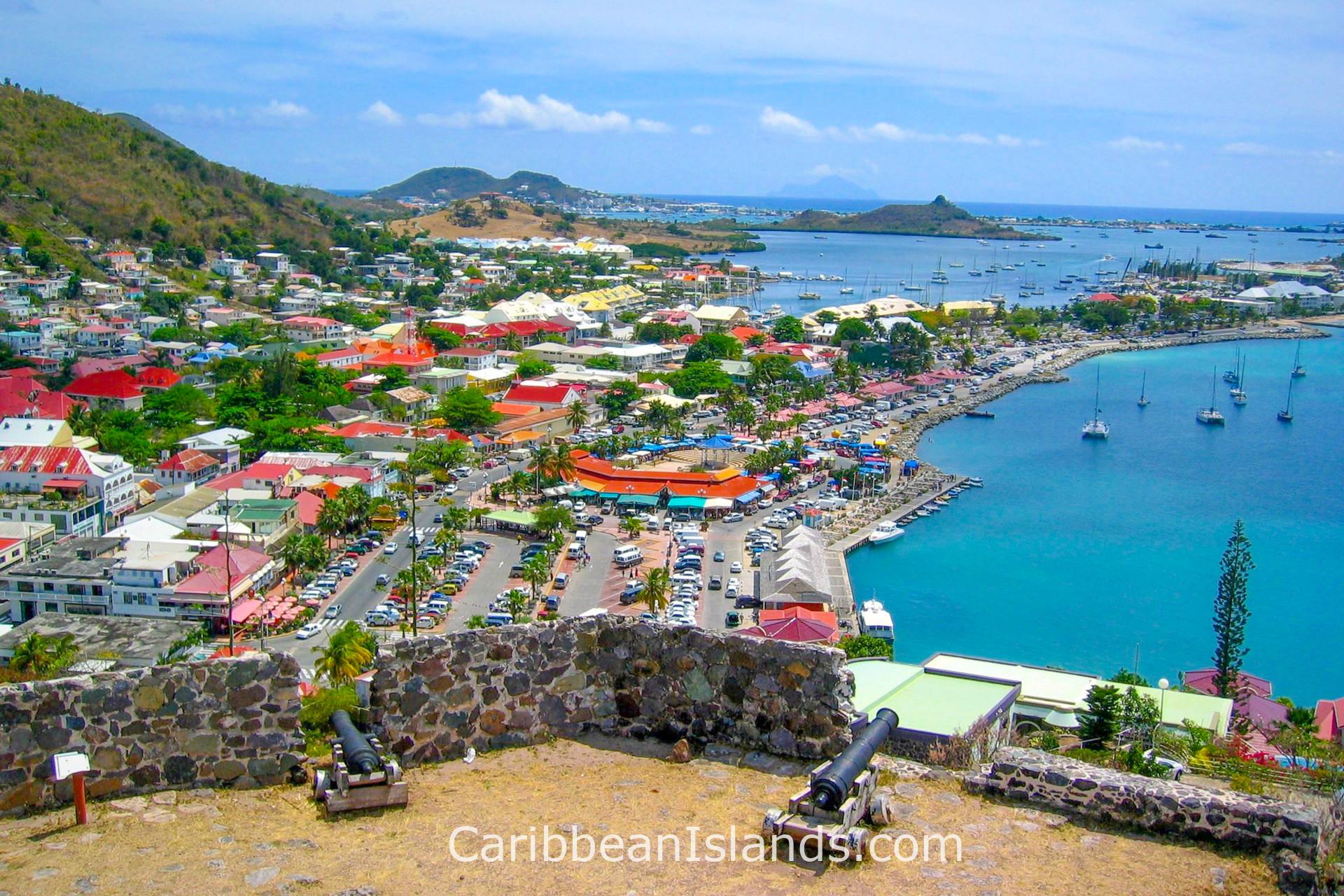 Saint Martin is the northern region of an island nation divided between France and the Netherlands. Saint Martin is a French territory covering about two-thirds of the island located in the Leeward Island region. It is well known for its nude beaches and high-end, trendy shops.

Once a small fishing village, Marigot has blossomed into a quintessentially Caribbean town known for its sidewalk bistros and colorful gingerbread houses. The capital of the French side of St. Martin mixes a few traditional tourist attractions with many opportunities for seaside adventure.

“Marigot” literally means “swamp,” and the area around the capital was filled with them when the town was established. Throughout the 18th century, the town grew thanks to booming sugar cane production and land filling projects, and today it is home to all the local government departments, vibrant markets, romantic promenades and some of St. Martin’s most interesting architecture.

The town is a mecca for duty-free shopping, and the winding streets of the central district are lined with French fashion and luxury boutiques. Many of the world’s most prestigious brands can be found there, and the unbeatable prices make Marigot a great place to stock up on gifts and souvenirs.

For a more traditional shopping experience, spend a day exploring the sprawling Marigot market, a melting pot of smells, colors and sights that exudes a lively hustle and bustle. Locals arrive each morning as the sun comes up to sell the freshest fruits and vegetables, fish, spices and meats, and traditional restaurants hug the perimeter. Don’t leave without sampling the sweetly flavored rums and indulging in some “colombo,” a fish stew spiced with a curry blend.

The Rue de la Republique is one of the best places to wonder at the 19th-century traditional facades that largely define St. Martin’s architecture. The well-preserved homes have retained much of their architectural authenticity. Stone and lime mortar make the ground floors, and the second levels are made of wood using traditional construction methods. The dwellings are known for their upstairs galleries decorated with gingerbread friezes and their delightfully designed balustrades.

The Catholic Church of St. Martin’s was erected on Fort Louis Road in 1941 to serve the needs of the island’s religious minority. Built in the traditional stone and lime style, the church was recently renovated by the island’s young people as part of a school project.

The nearby Fort Louis was built in 1789 to protect the city and defend its warehouses that stored rum, salt, sugar cane, coffee and other produce. The fort later fell to ruin but since 1993 has been the focus of an ambitious government-sponsored reconstruction project. Visitors are still welcome to explore the fort and take in the breathtaking views of the city, Simpson Bay Lagoon, Anguilla, Simpson Bay, Baie Nettle and the Terres Basses.

The narrow alleyway at the base of the fort also leads to the island’s original prison. Although the building was transformed into a fire station in 1968, its facade still retains its original appearance.

The Marigot Cemetery is the final resting place of Auguste-François Perrino, an important figure in slavery’s abolition. Perrino was a shareholder in many companies that operated salt pools in St. Martin, and in 1847 he published a work outlining the mistreatment of slaves. He died on the island in 1861 and remains one of St. Martin’s most celebrated historical figures.

If you tire of swimming, diving, sailing and snorkeling off the shores, there are more places to explore in and around Marigot, including the Loterie Farm, the 424-meter summit of Pic Paradis, the Saint Jean Plantation, the former Spring Sugar Mill, the Hope Estate Archaeological Site and the National Nature Reserve of Saint Martin, which is home to an intoxicating array of flora and fauna.