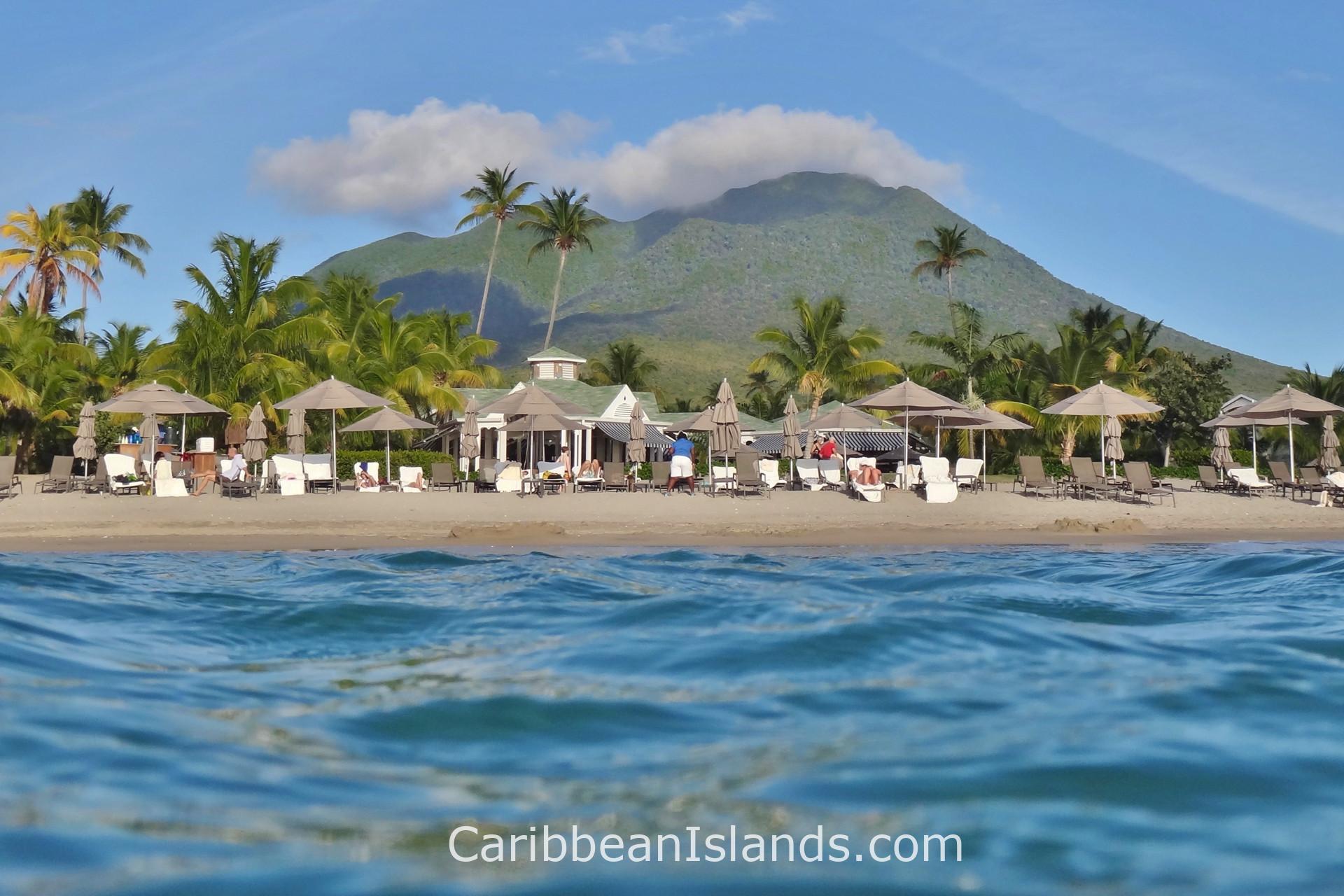 Sandwiched between Puerto Rico and Trinidad and Tobago, St. Kitts and Nevis offers a compelling mix of West Indian, French and English influences. Numerous ancient British forts dot the landscape, so history buffs are sure to have a field day. The islands roughly form the shape of a baseball and bat, and the channel between them is known as The Narrows. At 1,156 meters, Mount Liamuiga is the highest point here, and it’s well worth it to hike to its summit to take in the amazing views. From scenic railway rides to wonderfully secluded, tranquil beaches, it’s easy to see why St. Kitts and Nevis is such a popular destination.

The heart of the city is Independence Square, constructed in 1790. Originally used for council meetings and slave auctions, the square is now a symbol of the islands’ independence from Britain and is a lively gathering place for local families. Many parades and parties are held there under the shade of the palm trees, and the surrounding 18th-century Georgian buildings are a stunning example of local architecture.

Basseterre has a fascinating history, and the story of the capital comes alive at the National Museum. Housed in the late 19th-century Old Treasury Building, the museum opened its doors in 2002 and has been expanding ever since. The diverse exhibits focus on the heritage and history of St. Kitts and Nevis, walking visitors through the eras of slavery, sugar production, rebellion and finally, independence.

The nearby St. George’s Anglican Church is the city’s largest religious institution. Originally built by French Jesuits in honor of the Virgin Mary in 1670, the church was destroyed by English soldiers in 1706. Four years later, it was rebuilt as St. George’s Church and taken over by the Anglicans in the 1720s. A hurricane and earthquake later took their toll on the building, leading to more reconstructions. The church that stands today was built in 1844, then largely ruined in the Great Fire that ravaged the city in 1867. It was restored twenty years later, only to be damaged again by yet another hurricane in 1989. The resilient and handsome building survives today, and although it is still under renovation, visitors are welcome.

Other signs of the islands’ colonial past are present throughout the city, but the most obvious symbol of British influence is the Circus, a roundabout modeled after London’s own Piccadilly Circus. Restaurants and luxury shops surround the circle, which winds around an ostentatious green bronze clock tower.

The more modern side of the country can be explored at Port Zante, a growing pier and marina that welcomes visitors with impressive stone arches and columns that give way to walkways, gardens, fountains, shops, galleries, casinos and restaurants. The selection is fabulous, and the port is one of the best places to enjoy a traditional Caribbean feast.

Basseterre is surrounded by tropical paradise, and many snorkeling and diving tours leave from the city’s port daily. The clear turquoise waters just off the shore are home to a stunning array of marine life, including vibrant coral colonies, snapper, angelfish, octopi, lobsters, sea turtles and other amazing creatures. Other thrilling water adventures are easy to seek out in the capital, including yachting, catamaran cruises, fishing, windsurfing, kayaking and kiteboarding.

When the stars come out over the Caribbean, head to the Frigate Bay area where the nightlife is vibrant, the rum cocktails are cheap and the pulsating beats of calypso music don’t stop until the sun comes up. Bonfire barbecues are common on the beaches, serving up lobster, curried conch and other local treats, but the city also has a wide range of excellent international restaurants.

Basseterre is located on the southwestern coast of Saint Kitts Island and faces the Caribbean Sea.

The population of Basseterre is approximately 16,000.

The official language of St Kitts and Nevis is English however the dialect is difficult to understand by many English speakers.

The population within the “other category” is mainly comprised of other Protestants.

The Eastern Caribbean Dollar is the official currency of St Kitts and Nevis.

Basseterre experiences steady rainfall throughout the year as well as consistently hot temperatures.

Other Attractions in Basseterre

Saint Kitts and Nevis is made of two islands