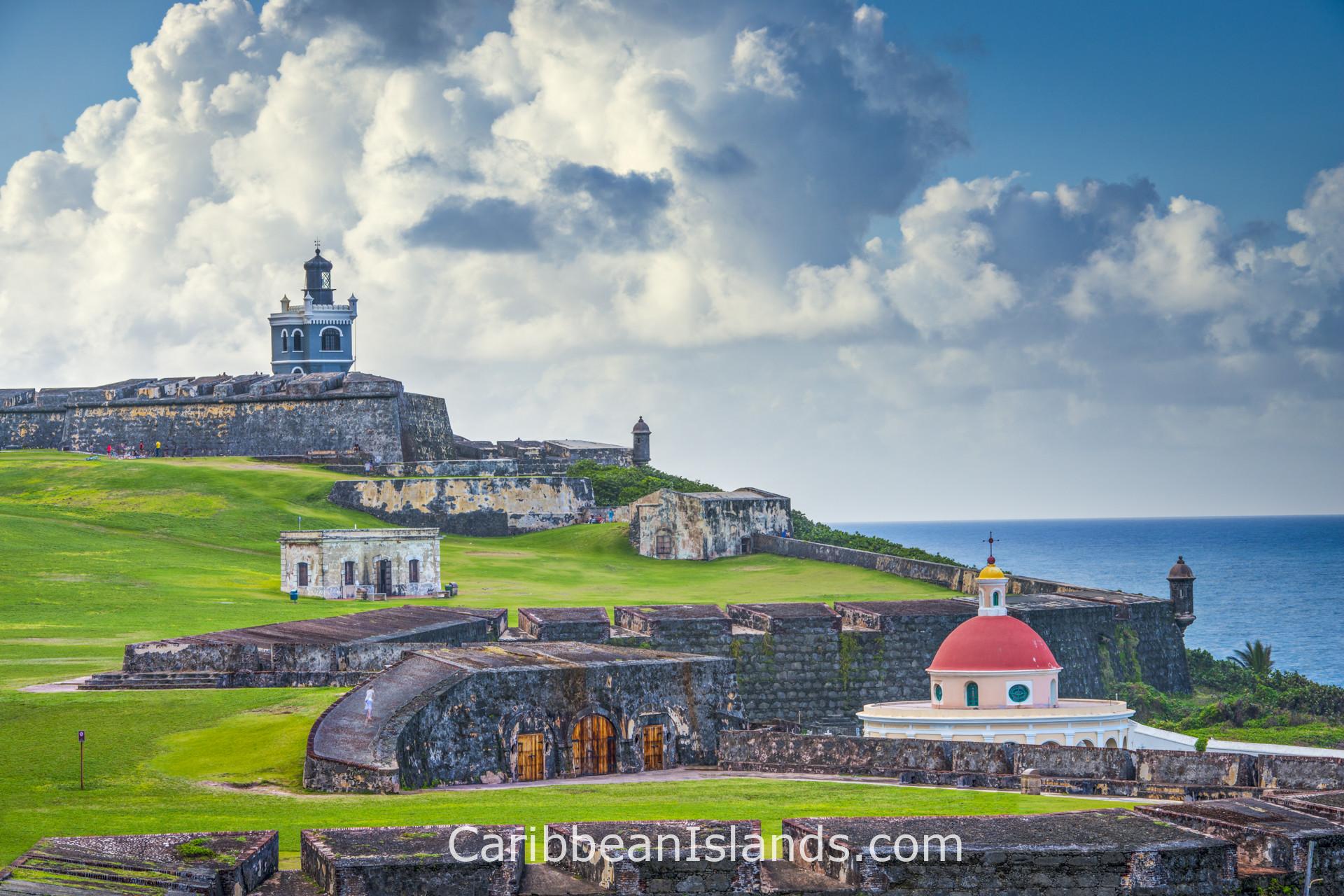 Because it is an official territory of the United States, Puerto Rico is a convenient vacation destination for American travelers. Spanish and English are the main languages on this large island, which boasts a population of around 4 million people. Roman Catholicism is, far and away, the predominant religion, and residents of Puerto Rico tend to be very devout.

Puerto Rico has a lovely tropical marine climate, so the weather tends to be consistently mild and pleasant throughout the year. The main exception is hurricane season, which falls between June and November here. The terrain is overwhelmingly mountainous, with a band of coastal plains to the north.

If you travel to Puerto Rico, you’re likely to arrive by plane at Luis Munoz Marin International Airport in Carolina. Other major cities in Puerto Rico include San Juan, the capital; Ponce, the second-largest city; and Rincon, the surfing capital of the Caribbean.

Puerto Rico is bursting with amazing natural scenery, including bioluminescent bays and gorgeous white-sand beaches. Staying busy is a snap thanks to fun activities like golfing, snorkeling, scuba diving and gambling. The cuisine here is dominated by plantains and pork, and rum is the alcoholic beverage of choice. Be sure to tour a rum distillery while you’re here, if you’re lucky enough to visit.

San Juan sizzles. The Puerto Rican capital has a pulsating energy with exotic sight and surreal sounds resonating throughout the city, the oldest under the jurisdiction of the United States. Salsa stanzas echo throughout the streets while the Atlantic roars and colonial artifacts delight. The capricious capital is made of many distinct neighborhoods, including the gambler’s paradise of Condado, the ritzy and tranquil Ocean Park, gritty but gallery-filled Santurce, swanky Isla Verde and the incomparably charming Old City, marked by candy-colored relics of the Spanish colonial era.

Old San Juan truly has something for everyone: stunning architecture, memorable views, historical sites, plazas perfect for people-watching, impressive museums, world-class restaurants and plenty of bars and nightclubs for salsa dancing the night away. The best way to explore the seven-square block neighborhood is on foot, but the free trolley service takes visitors to the most popular sites.

The highlight of Old San Juan is El Morro, a six-level fort that juts aggressively over the Atlantic. It is the New World’s oldest Spanish fort, and the 15-foot thick stone walls date back to 1539. Once a rest stop for soldiers, explorers and pioneers, the fort is one of the city’s biggest tourist draws today. Be sure to stop at the fascinating Inscription Rock, where bygone wayfarers left behind signatures, messages and petroglyphs in the sandstone.

The Cathedral of San Juan Bautista stands just a short walk from El Morro. Originally a wooden structure built in the 1520s, the church was destroyed by a hurricane and rebuilt in 1540. The rebuilding included many improvements, such as dramatic Gothic vaulted ceilings and a graceful circular staircase. The marble tomb on the north side holds the remains of Ponce de Leon, and the dome’s trompe l’oeil work is positively breathtaking.

Water sports are another big draw in San Juan, where white sand beaches meet excellent waves over the warm crystalline water. Take an aqua adventure off the coast to swim, scuba and snorkel with some of the world’s most remarkable marine life, including teeming reefs alive with butterflyfish, turtles, starfish, puffers, angelfish and more.

Spend the rest of your time in San Juan hanging out with locals at the Plaza San Jose, learning about mid-16th century life at the Casa Blanca museum, flying a kite in the sea breeze, discovering Puerto Rico’s African heritage at the Museum of African Roots, shopping for designer fashions on Cristo Street, feeding the birds at Pigeon Park and sampling rum at the Casa Don Q.

The weekend effectively starts on Thursday, and there seems to be some sort of celebration throughout the city each weekend. To fit in with the crowds, dress up a bit, especially on Friday and Saturday nights. Women head out to the nightclubs in their best dresses and highest heels, and even the men dress with flair. Many locals spend the nights dancing to live music at San Juan’s many upscale hotels, many of which also have casinos. In Old San Juan, the hottest clubs are on the Calle Fortaleza, where salsa music blares from pool-hall jukeboxes and mellow jazz bands serenade crowds at top-flight lounges. You’ll see lots of young and beautiful people hanging out in Plaza San Jose, and more bohemians and professionals in Santurce, the downtown area. Both crowds tend to stay out late on the pedestrian streets, and you will want to stay out with them to enjoy every minute of your San Juan experience.

San Juan is located on the northern coast of Puerto Rico facing the Atlantic Ocean. It lies just east of the country’s center and is its most populated city with approximately 400,000 inhabitants.

Spanish and English are both official languages of Puerto Rico although English is taught as a secondary language.

Although Protestantism was suppressed under Spanish rule, it has flourished since.

The US Dollar is the official currency of Puerto Rico.

San Juan is hot all year round with the summers becoming uncomfortable at times. It rains throughout the year, for the most part evenly although November and December typically see the most rainfall.

Other Attraction in San Juan