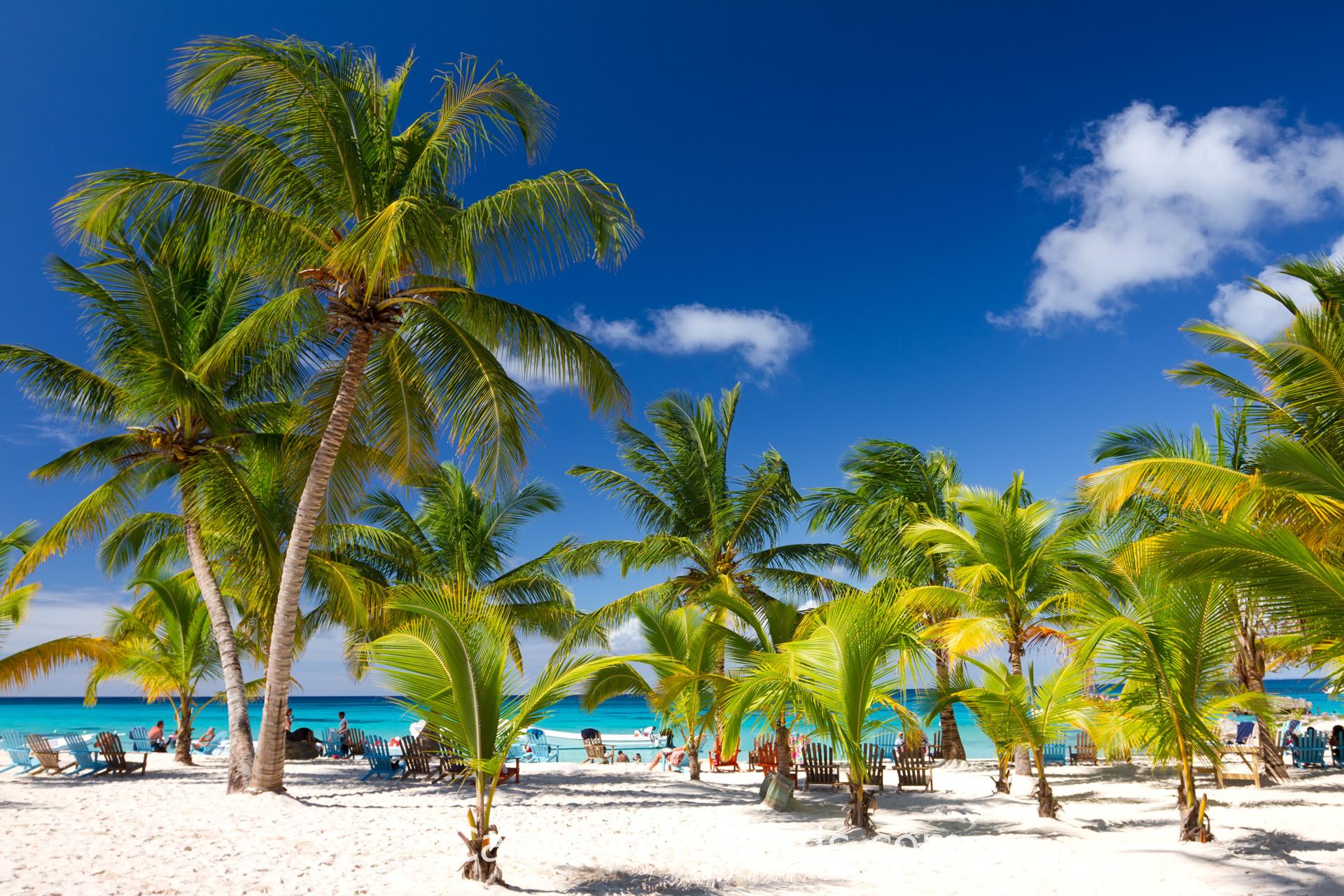 Stretching across two-thirds of the island of Hispaniola, you’ll find the Dominican Republic. The other third of the island is taken up by the country of Haiti. With the Caribbean Sea to the south and the North Atlantic Ocean to the north, the Dominican Republic is conveniently located for travelers from North America. Many arrive on cruise ships, but plenty of others fly in and arrive at Punta Cana International Airport. The capital, Santo Domingo, offers a wide range of attractions and things to do. The Dominican peso is the official currency, but American currency is widely accepted. Spanish is the official language, but many residents speak English fluently as well.

The terrain of the Dominican Republic is incredibly diverse, with arid deserts, tropical rainforests, mangrove swamps and alpine ranges. Beaches abound too, and most of the best luxury resorts are situated on the north and east coasts. Depending on where you go, you’ll find colonial architecture, sugar plantations, quaint villages, mountain retreats and much more. Due to the prevalence of storms and hurricanes from June through October, it’s generally best to visit the Dominican Republic between November and May. Most people stay in Santo Domingo, Punta Cana or Higuey. The cuisine here is dominated by standard Caribbean fare like beans, rice, seafood and tropical fruit, so you’re sure to eat like a king while you’re here.

Watch the video about Punta Cana

Santo Domingo pulsates with Latin rhythms. The soundtrack of the city is made with bachata music blasting from corner stores, the sound of domino pieces slapping on tables and of a vibrant beating heart that fuels the collage of neighborhoods and cultures. The intensely urban city is home to many New World firsts, colonial-era relics and the Dominican Republic’s best cultural institutions. A living museum, the capital is part seaside resort, part metropolis and part political center, all with a laid-back spirit that quickly makes it feel like home.

The Colonial Zone is the heart of Santo Domingo, and the narrow streets that make up its arteries are lined with some of the country’s most beautiful and interesting attractions. Examples of 15th and 16th century architecture abound, and knowing that Christopher Columbus himself walked the streets lends the entire district a magical atmosphere.

The Ozama Fort was built in his lifetime, making it the New World’s first military edifice. Situated at the meeting of the Caribbean and the Rio Ozama, the fort defended the city against pirate attacks and today takes visitors back in time with its impressive cannons, castle-like design and imposing towers.

Columbus’ son, Diego, and his family lived in the building that is now the Museo Alcázar de Colón. The Gothic-Mudéjar style building today contains the Caribbean’s most significant collection of Renaissance and late medieval artwork, but even more interesting is the building’s history. Many expeditions of exploration and conquest were planned there during the early Spanish colonial period, Sir Francis Drake sacked it in 1586, and it later served as both a warehouse and a prison.

The first stone of the Catedral Primada de América was laid by Diego Columbus in 1514, but the church was not completed until 1540. Numerous architects made their mark on the church, which is why the ornamentation is baroque, the vault is Gothic and a Romanesque style is visible in the arches. This combination of styles makes the building magnificent inside and out. Tranquil, beautiful and stimulating, one can nearly sense the presence of God in the remarkable landmark.

The Colonial Zone is filled with other treasures to explore, including the Ruinas de San Francisco, where live bands play salsa, merengue and bachata music on the weekends, the Puerta de la Independencia, the Panteón Nacional and the Calle Las Damas, the oldest street in the New World.

There is a wealth to explore outside of the Colonial Zone as well. To experience the more modern side of Santo Domingo, walk along the Malecón, a waterfront boulevard boasting many restaurants, cafes, clubs and casinos. Take a romantic carriage ride, have a glass of Presidente beer and take in the best people-watching opportunity in the city while enjoying the refreshing Caribbean breezes.

Few capitals combine urban life with natural beauty as well as Santo Domingo. The capital is dotted with green spaces lush with exotic flora. Spanning an enormous ridge of limestone is the Parque Mirador Del Sur, a tree-filled corridor riddled with caves, one of which has been transformed into a restaurant. At the National Botanical Gardens, orchids, ferns, bromeliads, palm trees and more grow throughout the well-tended grounds. As you breathe in the fragrant air and feast your eyes on the boldly-colored flowers, you will quickly forget you are in a city of two million people. The entire space feels like paradise, giving you just one more reason to fall in love with Santo Domingo.

Santo Domingo is situated on the southern coast of the Dominican Republic facing the Caribbean Sea. Santo Domingo is the country’s largest city with a population of approximately 3,720,000 throughout the metropolitan area.

Spanish is the official language of the Dominican Republic and is the predominant language throughout the country. English is taught as a second language at most private schools.

The Dominican Republic provides religious freedom even sheltered to Jews who escaped Nazi Germany and founded the city of Sosúa.

The Dominican Republic Peso is the official currency.

Santo Domingo experiences its rainy season from May to October although smaller amounts of rain can be expected throughout the year. It is usually hot during all seasons with July and August being the hottest months.

Other Attraction in Santo Domingo