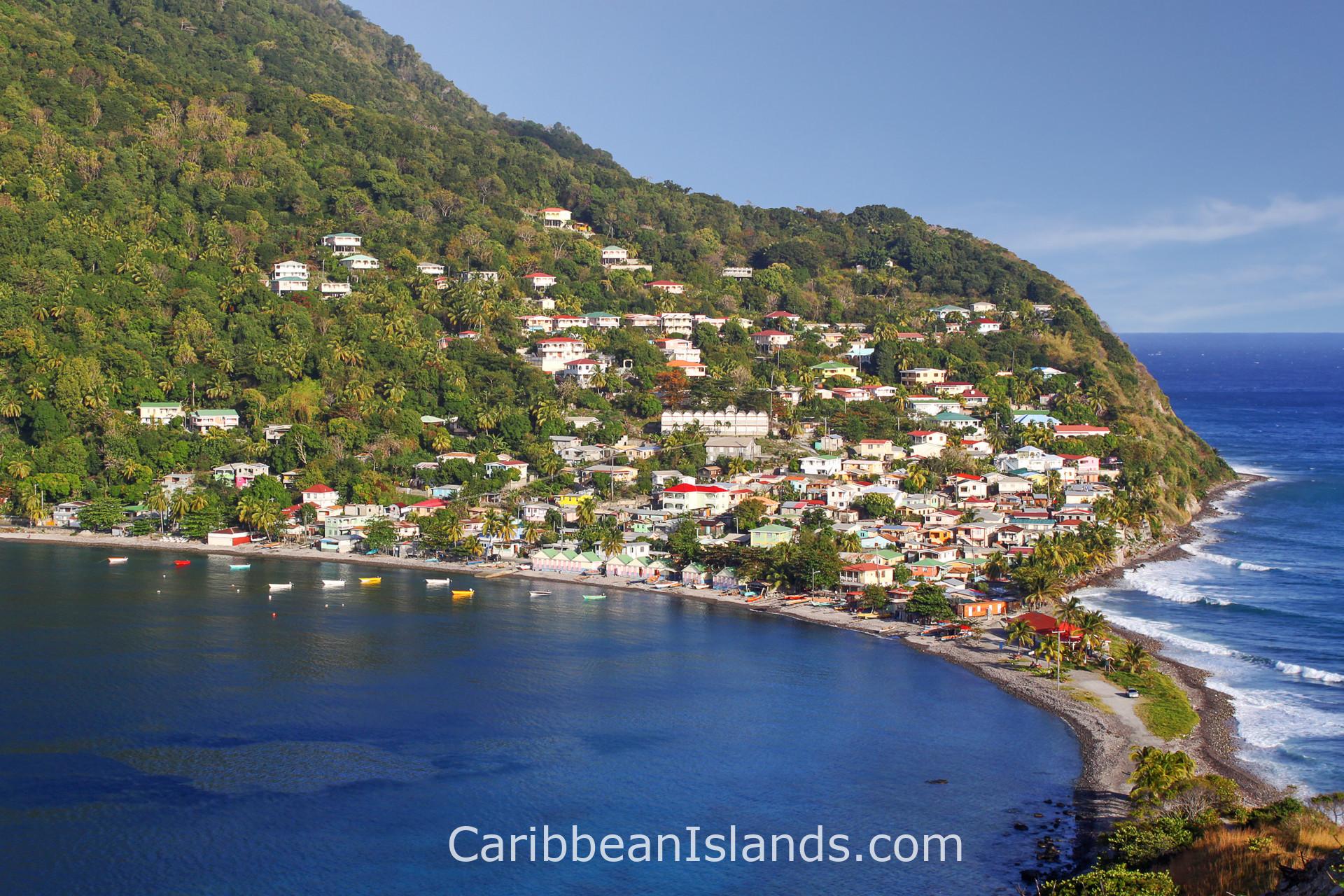 Dominica is an island nation located in the Lesser Antilles area south of Guadeloupe and northwest of Martinique. Known for its luscious rainforests and warm, tropical climate, Dominica is a popular vacation spot that offers a wide variety of water and land activities. Roseau, the capital of Dominica, is located on the west coast. It has a mixture of French colonial and modern architecture, breathtaking waterfalls and relaxing thermal springs. The official language is English and the currency is the East Caribbean dollar. The main transportation to the island is the Canefield Airport located close to Portsmouth, and the Melville Hall Airport located close to Roseau.

Roseau is a colorful capital where reggae and dance hall music blares nearly everywhere, people zip around the narrow streets on scooters and wonderful views of the Caribbean and the mountains can be enjoyed from practically any point. Dominica is nicknamed the Caribbean’s “Nature Island,” and Roseau is surrounded by a spectacular array of landscapes, making it a wonderful paradise in which to escape.

The native Caribs on Dominica fiercely resisted colonization, and the island was the last in the region to be taken over by Europeans. France claimed the island in the 17th century before surrendering it to the British in the next. The French Quarter remains the city’s most historic section, where the streets are lined with graceful wooden buildings housing vibrant shops, bars and restaurants.

In 1730, a French priest, Guillaume Martel, establish the island’s first permanent church. Made of solid wood, the church was destroyed by a hurricane in 1816. The church that stands today was built on the site 24 years later and expanded over the next century. The final product is one of the most beautiful structures in Dominica and an incredible example of the Gothic Romanesque Revival architectural style. The finely carved interior boasts many ornate murals painted by local masters, and the stained-glass windows paint the white walls with a rainbow of colored light.

The National Museum of Dominica is housed in a small, bright orange building that dates back to 1810. The outstanding collection highlights the archeology, social history, culture and geology of the island, telling Dominica’s story through photographs, colonial furniture, portraits, animal specimens, indigenous crafts and more. Well-curated and labeled, the collection provides a strong background to further exploration of the island.

Dominica has a remarkable array of flora and fauna, and visitors can see many species up-close at the Botanical Gardens. Just east of downtown, the gardens are filled with fantastic colors, smells and sights. The forty acres are lush with orchid and Carib wood trees, bottle palms and plenty of blooming sabinea carinalis, the national flower. A number of intensely colored and flashy parrots also call the space home.

Just outside the city but not far from the Botanical Gardens is the Emerald Pool, a favorite swimming hole of locals. The pool is fed by a 50-foot tall waterfall, and the water is refreshingly cold. Swimming in the heavenly setting is an ambrosial experience, and the pool is illuminated by tree-filtered sunlight, giving it an ethereal atmosphere.

The Emerald Pool is part of the Morne Trois Pitons National Park, a UNESCO World Heritage site that covers over 17,000 acres of the island’s interior. Another one of the park’s highlights is Trafalgar Falls, which is actually two separate waterfalls. The lower falls flow into the Boiling Lake area from the Trois Pitons River, creating a deep and wide pool perfect for swimming. Water from the upper falls plunges a 200-foot tall rock face before reaching hot sulfur springs. The trails to both of the falls are relatively easy to hike, but flash floods are a serious concern after heavy rains in the mountains.

Roseau is located on the southwest coast of Dominica along the Caribbean Sea.

Roseau is the largest city in Dominica and has a population of approximately 14,500.

English is the official language of Dominica while French Patois is also common.

There is a small Muslim population and Dominica’s first mosque was built recently.

The East Caribbean Dollar is the official currency of Dominica.

Roseau is hot throughout the year with precipitation occurring every month. The rainiest months are July and August.

Other Attraction in Roseau