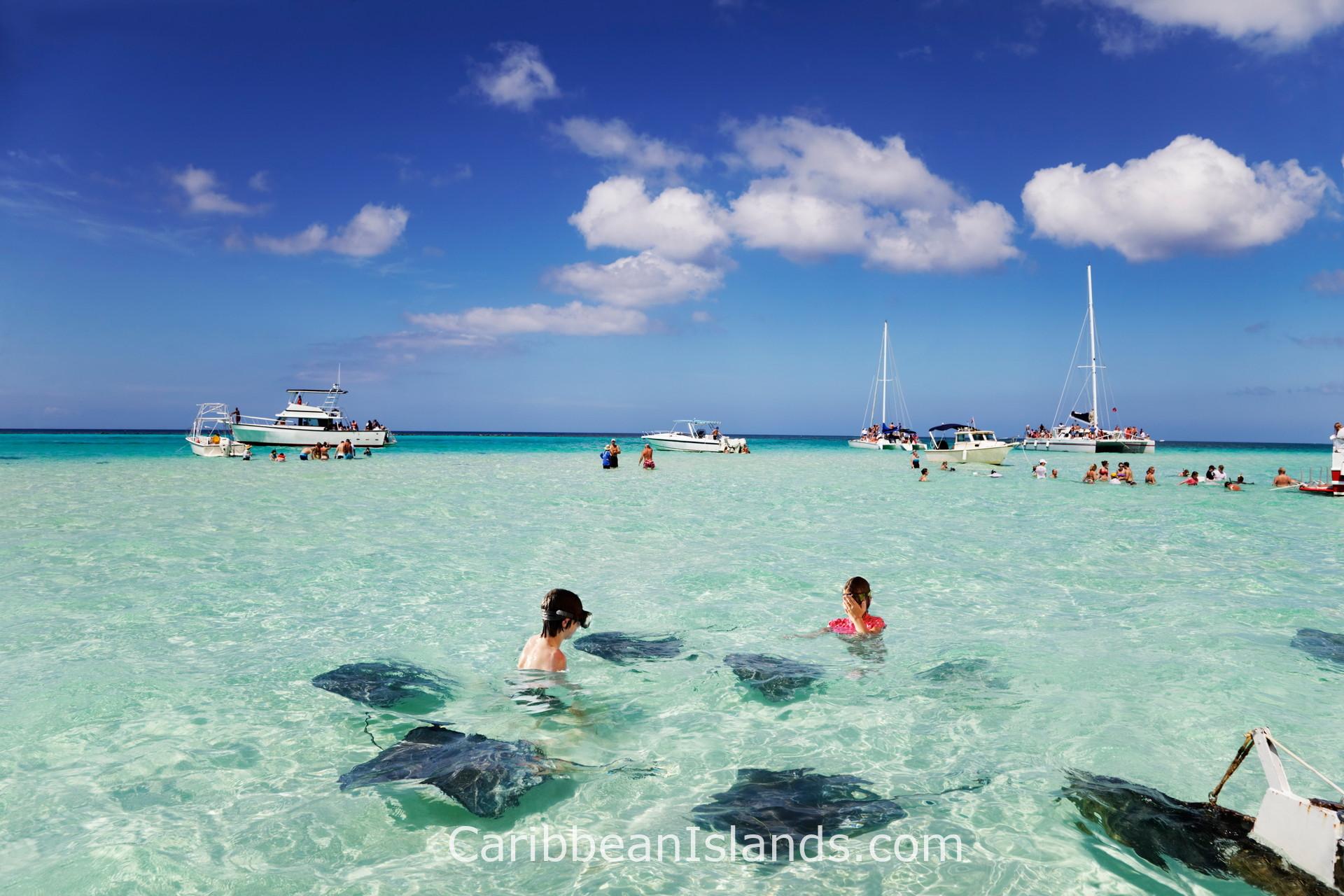 Playing with the stingrays at the sandbar off Grand Cayman

With its gorgeous coral reefs and shimmering, clear, turquoise waters, the Cayman Islands have long been a popular playground for travelers. The islands are particularly popular among divers, and excellent scuba diving and snorkeling sites abound. This UK overseas territory has a population of around 55,500 people. Its capital is George Town, which is located on Grand Cayman, the largest island. The Cayman Island dollar is the official currency, but American money is widely accepted. English is the predominant language, but many here speak local creole dialects.

In addition to Grand Cayman, the Cayman Islands consist of Little Cayman and Cayman Brac, which is where you’ll find The Bluff. The highest point in the Cayman Islands, The Bluff soars up to 141 feet. That may not sound very tall, but it stands out a lot due to the overwhelmingly flat terrain of the country. Most people who fly into the Cayman Islands arrive at Owens Roberts International Airport in George Town. They then scatter across the three main islands to enjoy a variety of exciting attractions. Seven Mile Beach is not to be missed, and Queen Elizabeth II Botanic Park is another popular spot. If you visit, be sure to check out Boatswain’s Beach, which boasts an amazing turtle farm.

The cuisine of the Caymans is dominated by conch, fish and turtle. Because hurricane season runs from June to November, it’s generally best to visit between December and May. Most of the hotels here are located on Grand Cayman, so it’s a good jumping-off point for other attractions around the islands. 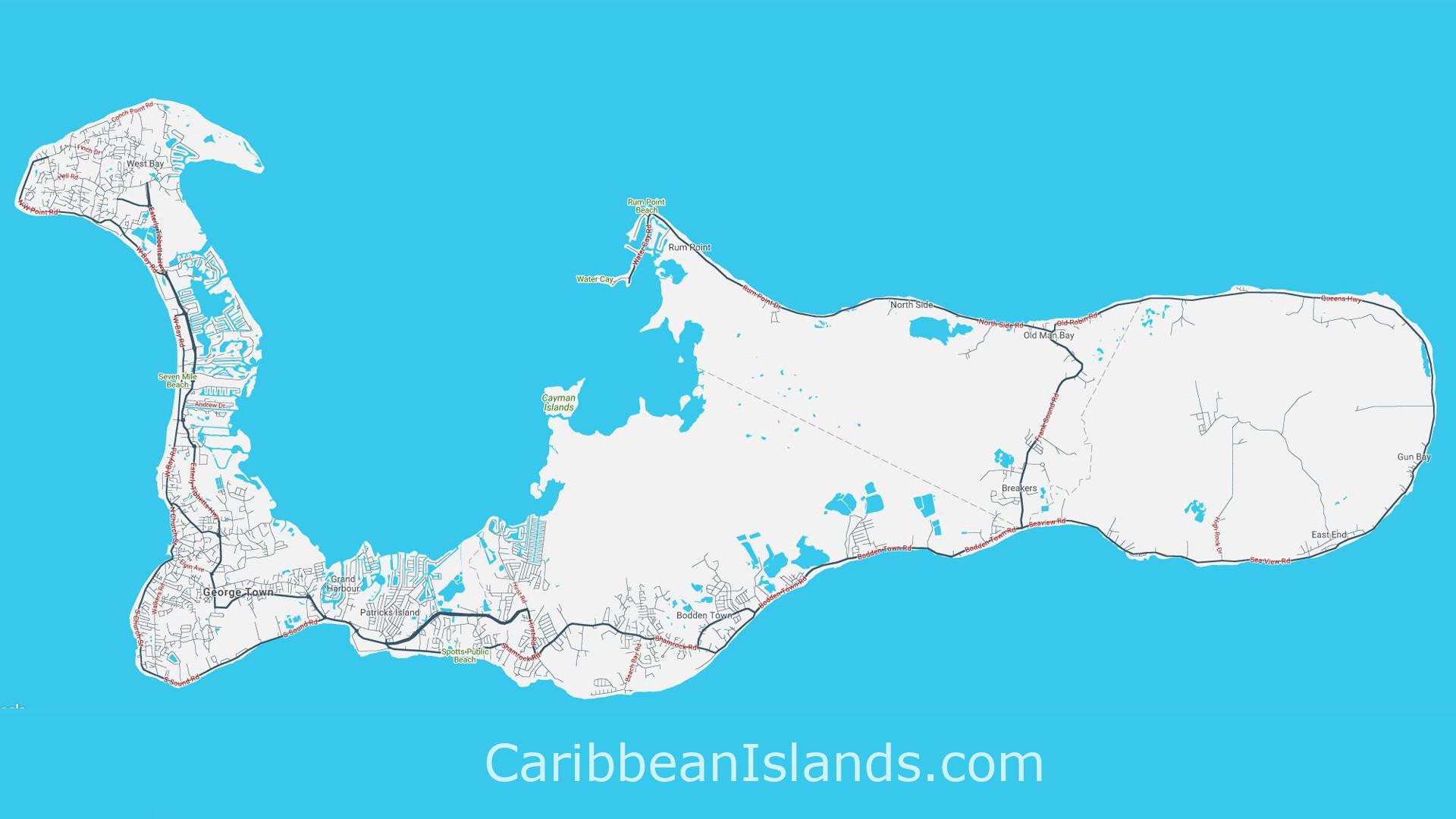 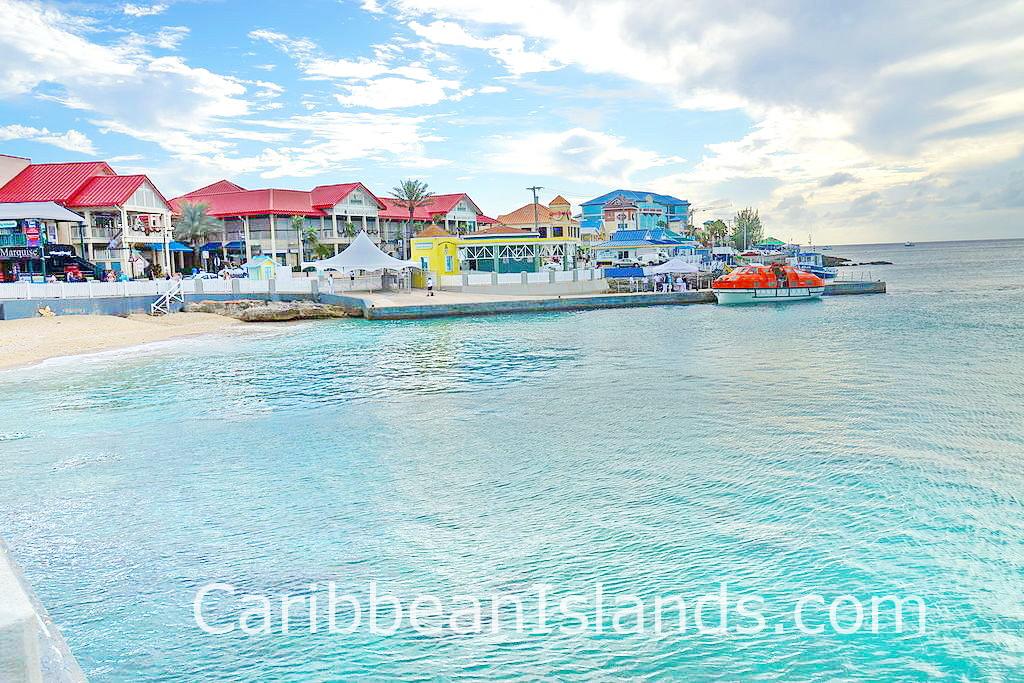 When most people picture the Cayman Islands, they envision white sand beaches, glitzy shopping centers and wealthy people from around the world discreetly playing with their riches while sipping cocktails. That describes life well in George Town, the capital city. There, cockerels welcome the day by crowing at dawn, a Caribbean charm enchants and impromptu parties erupt at all hours on the beaches. Located on the island of Grand Cayman, George Town is the perfect mix of Caribbean paradise with a wealth of activities, restaurants and shopping.

Cayman islands video made by a tourist

Smith’s Barcadere is a sandy cove is a popular spot for snorkeling & has picnic tables, showers & restrooms. It is located at street Church St, George Town, Islas Caimán
Latitud: 19.276633 | Longitud: -81.393177

The cultural and natural histories of the Cayman Islands come alive at the National Museum. Located in the Old Courts Building, the museum is opened to visitors each day with the ceremonial blowing of a conch shell. Inside, everything from Catboats and coins to stamps, fantastic stuffed birds and traditional clothing provide visitors with a great introduction to the rich history of the Caymanian people.

Life was very different in the islands during the 18th century, and visitors can share the experience of the early settlers at the Mission House. The national historic site includes a two-story home built in the traditional Caymanian style. Once the home of missionaries, families and teachers who grew the Presbyterian ministry in Bodden Town, the original capital, the building takes visitors back to an earlier time while recreating the islands’ history. Genuine artifacts fill the bath, dining, living and bedroom, many of which were owned by the Watler family who called the place home for more than seven decades. A sense of family is evident in each room, and visitors understand the many challenges of missionary life as they walk the halls.

The surrounding grounds are also worth exploration. Dense epiphytes, or “air plants,” grow in thickets, five species of bromeliads thrive on the grounds, and the pond plays host to a variety of waterfowl, birds and freshwater turtles.

Just a 40-minute drive away from George Town is the Queen Elizabeth II Botanic Park. The world-class park is abundant with lush flora growing in themed gardens. A cotton-candy-pink cottage sits in the Heritage Garden, surrounded by white sands, fruit trees, medicinal plants, traditional crops and a separate cook room. Walking through the paths, visitors get a sense of life in the islands during the early 20th century.

While meandering the Floral Color Gardens, visitors pass by a rainbow of flowers arranged by hue. Bright pinks give way to vivid reds, fiery oranges, sunny yellows, serene whites and cool blue, mauve and lavender shades. In the center of the brilliant profusion is a gazebo surrounded by a tranquil lily pond.

Escape the hustle and bustle of George Town by taking a taxi to Seven Mile Beach, named one of the world’s “ultimate beaches” by travel experts. The stretch of white sand is one of the reasons why the Cayman Islands are celebrated as the epitome of an island escape and a premier Caribbean destination. Visitors from all over the world flock to the beach to explore the clear waters and coral sands. Walk past the hotels, villas, resorts, beach bars and shops that line the sand, work on your tan under the warm sun, relax while watching the waves roll in, or take a more adventurous route by diving, snorkeling, and boating in the crystalline waters.

The Cayman Turtle Farm is not far from the beach. One of the most exciting attractions in all of the Caribbean, the farm allows visitors to interact with and observe native flora and fauna, including sharks, eels, birds and over 10,000 green sea turtles.

George Town is located on the western shore of Grand Cayman, the largest island in the Cayman Islands.

George Town is the largest city in the Cayman Islands with a population of approximately 31,000.

English is the official language of the Cayman Islands and is spoken by the majority of the population. Spanish is spoken in small numbers.

Most establishments and ports are closed on Sunday because the people of the Cayman Islands are very religious.

It is consistently hot throughout the year in George Town with little fluctuation. The summer typically experiences the most rainfall.