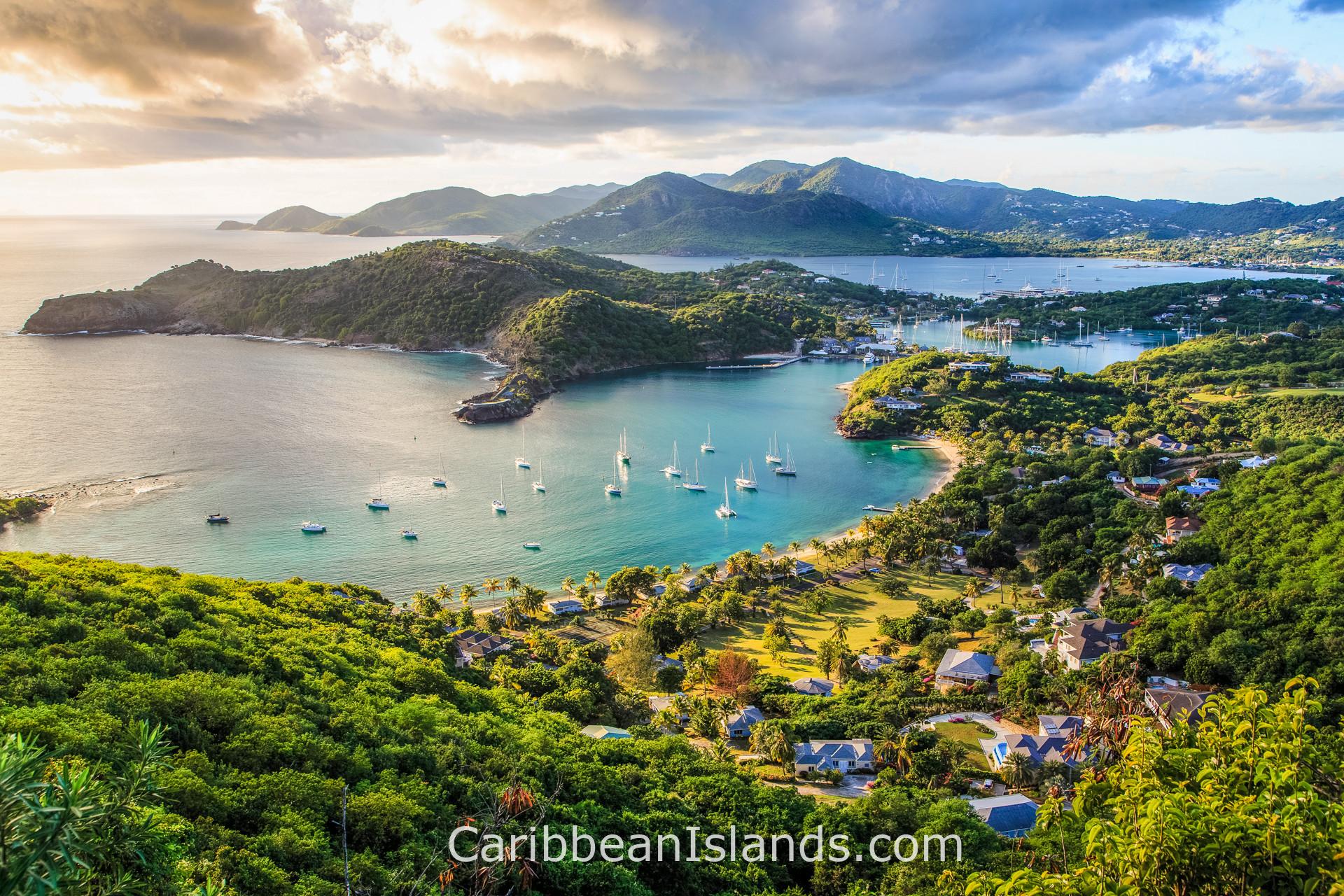 With its location off the coast of South America and east-southeast of Puerto Rico, Antigua and Barbuda is a wildly popular tourist destination. English is predominately spoken here, and the official currency is the East Caribbean dollar. The majority of the tourist attractions, including the finest luxury resorts, are located on the island of Antigua. That’s where you’ll find the capital city, St. John’s, as well as the main airport: V.C. Bird International Airport. Sailing regattas are held here annually and are well worth checking out. Fishing is also a very popular activity. If you visit, make sure to sample some of the local fare, including fungie, which is kind of like polenta, and pepperpot, a spicy pork stew. As with so many other Caribbean nations, rum is produced here in abundance.

Video about the island of Antigua

Enjoy this video about the island of Antigua in the Caribbean. It is an interesting travel guide explained by Expedia …

Saint John’s rises above Antigua’s harbor, welcoming visitors to the island with the site of brightly painted 19th-century homes dotting the rolling hillsides. Founded in the early 18th century, the capital is now home to over a third of the island’s population and a favorite cruise ship destination.

The city’s skyline is dominated by St. John’s Cathedral, whose evocative white baroque towers reach toward the often cloudless blue skies. Originally constructed in 1845, the cathedral was largely destroyed by earthquakes in both 1683 and 1745. Now in its third incarnation, the Anglican church is one of the island’s most impressive landmark, and the towers provide stunning panoramic views of the city and sea.

Antigua museum is in the oldest building in St. John’s , the 1750 Courthouse

The story of the islands comes alive at the charming Museum of Antigua and Barbuda. The fascinating collection includes an array of artifacts, including models of sugar plantations, the bat of cricket great Viv Richards and a life-size recreation of an Arawak dwelling.

English Harbor is the island’s graceful historic district, spanning a large section of Nelson’s Dockyard National Park. The world’s only Georgian dockyard, the area has been completely restored in recent years and now offers a number of sites of interest. One of the most interesting is the Clarence House, constructed for King William IV. Also worth a visit is the Dow’s Hill Interpretation Center, where multimedia presentations tell the story of Antigua from settlement to independence. Fine views of the harbor can also be enjoyed from the center’s observation decks.

At Shirley Heights, visitors can explore an array of military buildings and gun emplacements while enjoying breathtaking views over English Harbor. The nearby cemetery is also worth visiting, and its centerpiece is an obelisk built to commemorate the soldiers of the 54th regiment. Visit the area on a Sunday afternoon to sip on rum punch, feast on barbecue and dance to the tropical strains of reggae music and steel drum bands.

There is never a shortage of things to do in and around St. John’s. The capital gives visitors plenty of opportunities for adventure, both on the land and in the waters. Sailing has been an important part of the island’s culture for hundreds of years, and visitors can hire boats of all kind on the coast. The offshore waters are filled with wrecks to explore and good opportunities for shelf diving, and Dutchman’s Bay offers some of the world’s best conditions for windsurfing.

The quiet fishing village of Seatons is not far from the capital, and visitors embark from the village to the North Sound’s mangrove-lined islands. The picturesque trip ends at Barge reef, where Southern Stingrays abound in the crystal clear waters. Visitors are welcome to play with, feed and pet the tame creatures, and the amazing animals often astound with their friendliness. The unforgettable memory is made even better thanks to the pristine coral reefs and unbeatable scenery.

On land, visitors can hike through the island’s many trails, spot over 170 species of birds, golf at two world-class courses, ride horses from several stables and ride scooters through St. John’s with the wind in their hair.

Map of Antigua and Barbuda

Antigua is the island where Saint John is located, the capital of Antigua and Barbuda. It is also the most visited island

Barbuda is located north of Antigua island. The main points of interest are:

We recommend watching the report made during the visit to Barbuda of the “RAN SAILING”, a couple of young sailors …

Map of the island of Barbuda, part of Antigua and Barbuda